We were still too early in the year, after the harsh winter, to be able to access the Park via the North Entrance; this meant a longer drive around to the South Entrance, passing beautiful, fast-flowing streams and cliffs with trees barely hanging on, as erosion is clearly stealing their root-bed. As we entered the Park, the amount of snow slowly increased to dramatic proportions. There was just an incredible amount.

With 44 feet of average annual snowfall, Crater Lake National Park is one of the snowiest inhabited places in America. Keeping Highway 62 and the road to Rim Village open year-round is no easy task. Each day, the park’s heavy equipment operators work from 4am to 8pm in 2 different shifts, clearing snow and sanding roads. During heavy storms, snow removal becomes a 24-hour operation, with crews working 12 hours at a time. The amount of snow moved each winter by the park’s roads crew is astounding. With it, you could create a ski trail 3 feet wide, 6 inches deep, and long enough to circle the Earth at the equator! 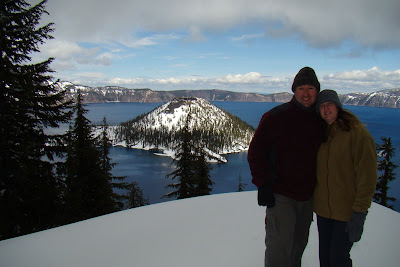 As the weather was clear, we by-passed the Visitor Center initially and headed straight up to the overlook at Rim Village. As with the Grand Canyon, seeing Crater Lake for the first time totally took our breath away, it is amazing, a brilliant blue, so deep and wide. 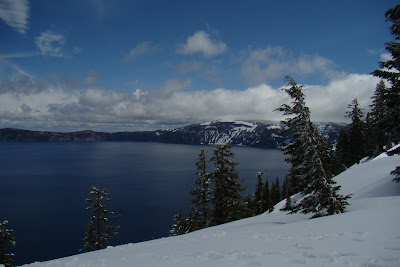 7,700 years ago Mount Mazama collapsed after a massive volcanic eruption and left a deep basin (caldera) where the tall mountain once stood. Centuries of snowfall and snowmelt filled this basin with clear, pure water of an amazing blue hue, creating a lake 1,943 feet deep. It is the deepest lake in America, five miles wide. It is one of the purest and most pristine in the world. This environment provides scientists with an opportunity to study the subtle effects of human influence and global forces. It never gets any higher than it is, as it drains off through natural holes in the rock face. 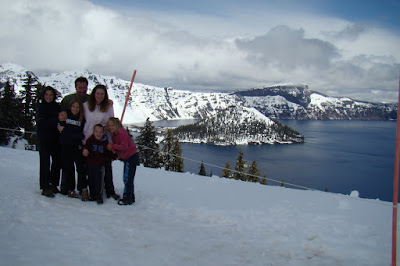 In 1853 prospectors in search of gold found the lake and named it Deep Blue Lake. Later, others came to ‘discover’ it and re-named it Blue Lake and Majestic Lake (this from a group of soldiers who were challenged by their leader to be the first to reach the water, whoever got there first would be allowed to name it!). William Gladstone Steel first visited in 1885 and largely as a result of his efforts, Crater Lake became a national park in 1902.

Despite the long, snowy winters, as a result of its position at the crest of the Cascade Mountain Range, Crater Lake rarely freezes. The last time it froze was 1949 and Rangers were able to walk across the ice layer to Wizard Island. It was still only frozen from 2”-12”. Generally, it absorbs so much sunlight during the warmer months that its temperature doesn’t change drastically enough in the winter to create freezing.

We drove back down the switch-backs to the Visitor Center, accessible through the snow tunnel. We watched the informational video, a short one about the challenges of snow removal – there is metal piping under the road to allow the plows to detect where to go, the rim trail really drops off, so plowing can be quite dangerous, followed by a presentation on how Crater Lake came to be here. The kids were able to complete their Junior Ranger program, while using the video, exhibits and informational panels and sat with Ranger Brian for quite some time discussing their answers.

All the kids were eager to get back in the snow so we drove as far as would along Rim Drive – only about a mile! – to get more pictures of the Lake. Although the road was closed to cars, we were able to walk along quite a distance; they are obviously doing a good job clearing the rim for summer opening in July. It’s hard to believe that the snow will all have melted in another 6 weeks, the walls of snow on the side of the road are currently at least 12 feet high in places! 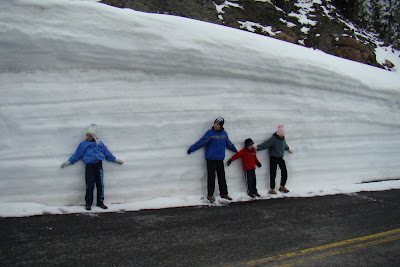 We had quite a few snowball fights along the way; it certainly distracted the kids from the fact that they were actually walking a ways! There were also more good photo opportunities of Wizards Island (so-named because it looks like a wizard’s hat) and also the Phantom Ship, a tiny little island on the far side of the Lake.

Our next stop was the Crater Lake Lodge area, a beautiful building with a very nice sledding hill next to it. We bundled up as best we could and carried those sand sleds, yep, back in service on the snow again – at the end of MAY! – to the top of the hill. They quickly created a great little run, and just as quickly, were soaked! Jake was determined to have another snowball fight, which Caitlin wanted nothing to do with as she was creating snow art and a mini-fort – so different those two! Thankfully I’d had the foresight to bring a change of clothes this time and they were needed!

Due to the long weekend, when we arrived back at the campground, it was getting quite crowded. Campers continued to arrive late into the evening, clearly a very popular place. We had a fire for the first time in a while, complete with filled mountain pies and s’mores, cooked over the flames. Despite how cold it was while we were there; we really enjoyed this beautiful, rustic, quiet campground – even though our water froze overnight!
Posted by The Valentines at 4:58 PM

This is the first time in days that I have been able to read your blog. You should be in the UK now with your family. Hope things are going okay for you and Caitlin and that the guys are doing okay in Reno.

Just curious what a mountain pie is?

Thinking of you. Ali W

Ali....Mountain Pie: also known as Pie Irons - you make a kind of toasted sandwich in a heavy iron square over the fire - SO good! I ordered ours from Amazon.com.

Heather....yes, Crater Lake was an absolutely AWESOME sight. Are you back home now?