April 5th: finally here! Almost 1 1/2 years ago, we reserved a condo in Orlando for spring break this year. We decided not to tell the children where we were going until we were at the airport. On the shuttle bus from the car park to the airport, they were guessing destinations, many were suggested including: England, Australia, China.... Jake did come up with Miami but none of them thought of Disney.

In the airport, Jake spotted a group of teens with Disney backpacks and figured it out. Caitlin still couldn't believe it. They were so excited. 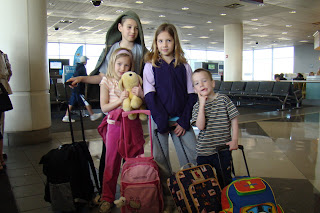 KC's (Becca's Kindergarten class) Spot also joined us on the trip. The head flight attendant on our airtran flight was so sweet, she asked if any of the children were first time flyers - we let her know Spot was! She gave him a certificate and a set of 'wings' and also allowed us in the cockpit once we landed to take photos with the pilot. What a great start to our holiday! 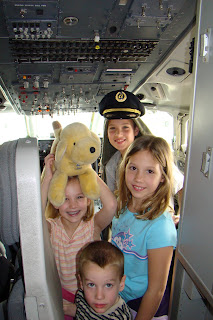