An EARLY start, we arrived at Magic Kingdom, via the Monorail this time, and walked through the doors shortly after 8am, I'd like to say we were almost first but that was not the case at all, there were already crowds! We watched the end of the opening little show and wandered up Main Street to get photos and a closer look at Cinderella's castle. 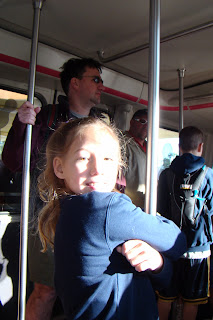 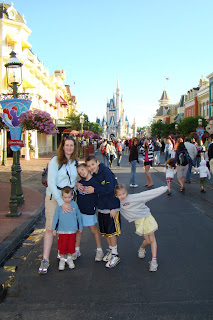 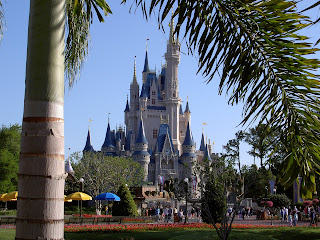 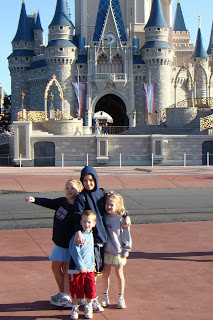 Dave went over to FastPass Big Thunder Railroad, while we headed towards The Crystal Palace for breakfast with Piglet, Pooh, Eeyore and Tigger. When Dave arrived, we realized they'd skipped our reservation. We were still seated within 10 minutes of our time but as an apology, they gave us FastPass tickets to Mickey's PhilharMagic in Fantasyland. 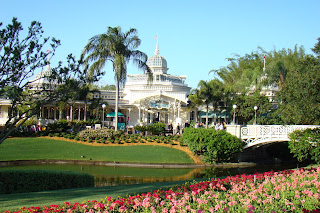 The breakfast was great, good food and having pictures with the Hundred Acre Wood characters as they wandered from table to table, was perfect. 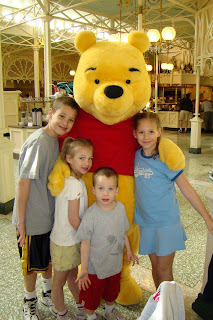 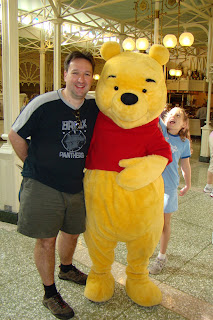 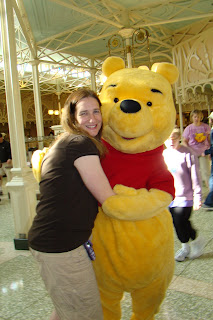 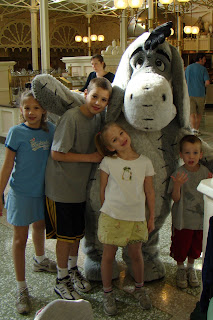 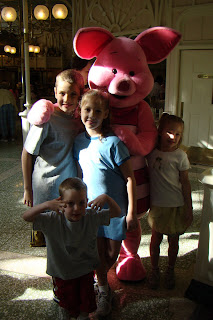 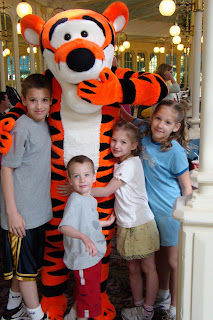 We rode the Big Thunder Mountain Railroad after breakfast (perhaps not the best choice!) and even Nate was able to go on. He just makes the 40" height restrictions on many of the rides. He was extremely nervous at the beginning but by the end was doing OK. I'm not sure he'd jump on it again but he didn't come off screaming! 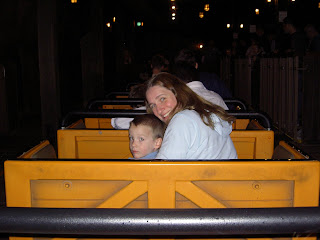 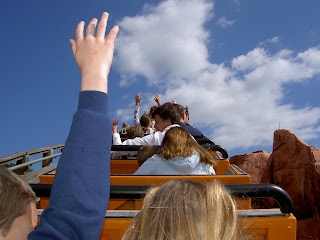 We FastPassed Splash Mountain before going to Mickey's PhilharMagic. I'm so glad we were given FP tickets for this show, it was aweseome! It was definitely my favorite of the day, we all loved it. When I asked what their favorite thing of the day was, all the children listed this 4D show among their favorites. Before heading over to Main Street, Dave took the kids on Cinderella's Golden Carrousel (spinning rides are definitely not my forte!), on our walk over, we stopped to allow Cinderella's Fairy Godmother to grant us a wish! 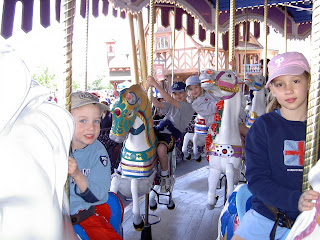 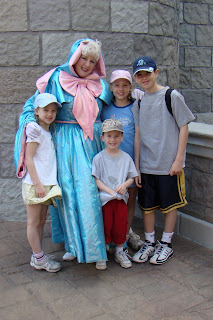 We opted to watch the noon Celebrate A Dream Come True Parade and managed to get a great spot at the turn near the front of the castle. It was exciting to see all the characters and dancers go by. During the day at Magic Kingdom, there are a couple of other mini parades with different characters, some of which we caught parts of at varying times during our week. 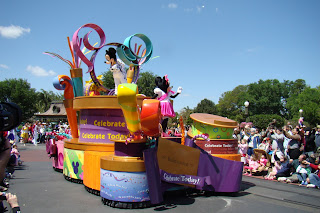 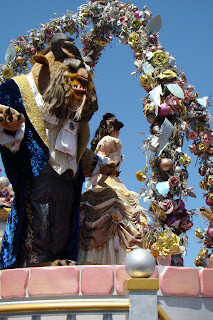 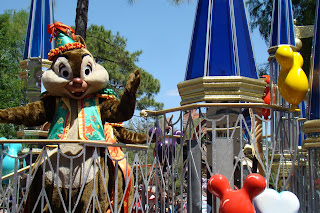 After the parade, we fought through the crowds and went back to Frontierland to ride Splash Mountain, those of us on the right hand side seemed to get most wet, Nate came off almost completely dry - what a nice Mummy he has protecting him! The ride was long and the Brer Rabbit storyline was a good one. 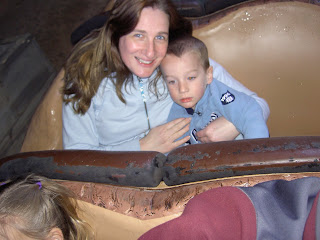 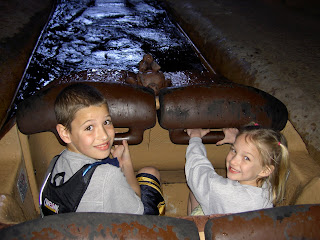 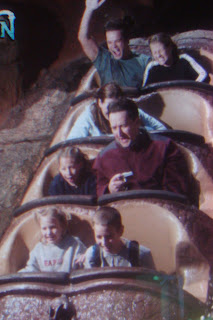 During the afternoon, the crowds really picked up, many rides and attractions had long, long wait times. We did manage to ride The Magic Carpets of Aladdin, climb through the Swiss Family Treehouse, take the Jungle Cruise (thanks again to FP) and go on the Pirates of the Caribbean ride in Adventureland. We later found out that Magic Kingdom actually closed before 11am for a few hours as it had reached its full capacity of 600,000 - certainly felt like it too! 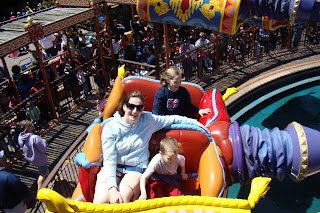 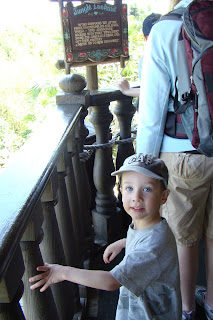 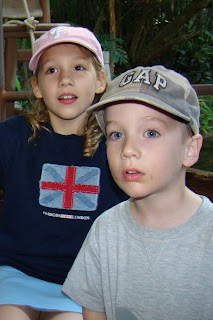 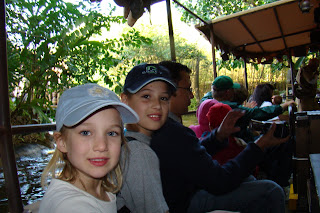 Before we used the FP, we went on the It's a small world ride - a Disney classic - and had fun (well C,B&N!) running around in Pooh's Playful Spot! We waded through the 3pm parade crowds to get back towards Adventureland, stopping to go over to Tom Sawyer's Island to explore. I think this would've been more exciting if we weren't getting tired.

(Quick interjection: Some of our photos have come out looking really grainy, this is unfortunately due to our camera changing its settings without our realization - so annoying but now too late to do anything about). 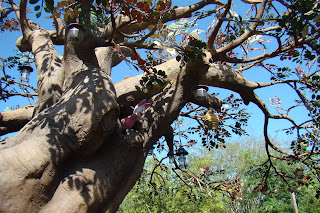 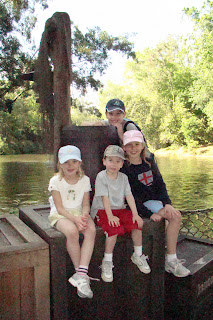 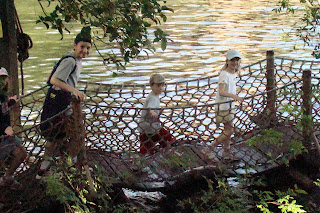 We left the park around 7:30, filled up with popcorn and trying to warm up. It was a cold, windy day by FL standards, definitely not T-shirt weather, looks like warmer temps tomorrow. 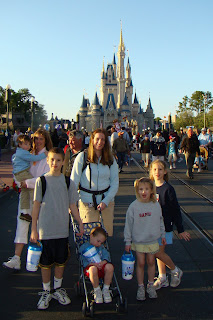