Today we walked through the MK gates before 8am, it was particularly tough to get up today, and headed straight towards Tomorrowland and Space Mountain for FastPasses.

While in that area, we all went on Astro Orbiter, the spinning ride up above Tomorrowland with the planets. For me, the elevator would've been enough of a ride! It was definitely one that I happily ticked off my list and plan not to repeat, way too much spinning around! 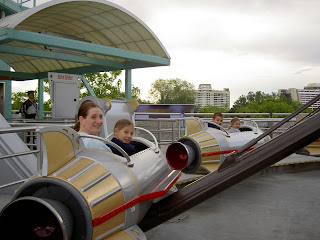 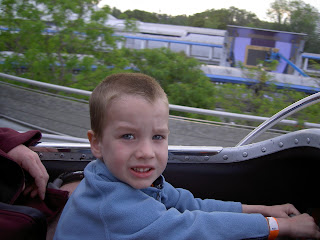 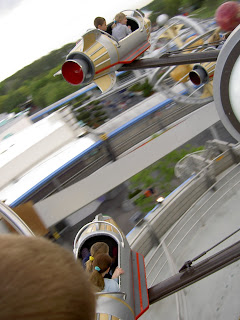 As we made our way over to Frontierland, we passed through Liberty Square and the kids went in the stocks, lucky for them, we didn't have any rotton tomatoes to throw. The Hall of Presidents was closed for refurbishment, however The Haunted Mansion, a journey through the dark with happy haunts, did not have a line so we went on that ride. Caitlin scared herself before we went on but the ride itself was great fun, nothing horribly scary at all, Nathan really liked it too. 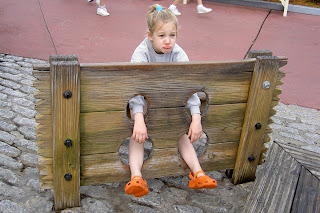 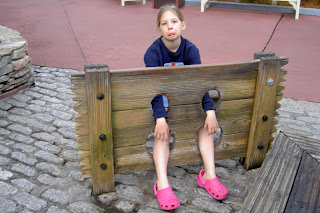 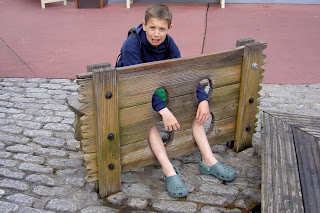 So, back to Frontierland we went again and once again, onto Big Thunder Mountain Railroad. Nathan was still tired and refused point blank to go on the ride. Dave and I did parent switch which meant the older three were able to go on again, they would've happily gone again if the chance had been there! It did mean I was able to get a couple of pics of Dave and the kids on the ride, as they came out of the tunnel. 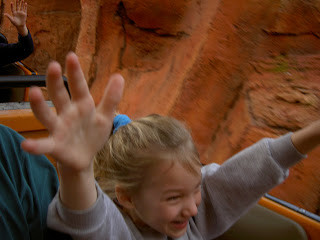 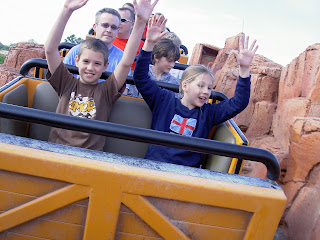 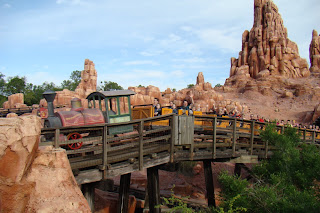 We thought a little rest was in order so headed in to watch the Country Bear Jamboree. The 3 animal heads on the wall were so funny, the girls liked the little bear on stage who squeaked its little teddy bear at the end of each song.

As we walked across the Castle Forecourt Area, we timed it perfectly to see the Move It! Shake It! Celebrate It! Street Party. All the characters were dancing on floats, some we hadn't seen around before. The parades this week have been really impressive. 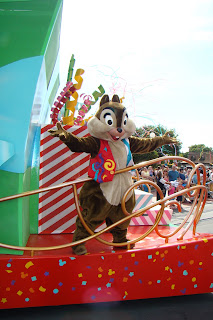 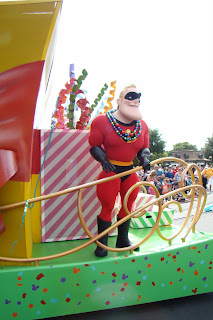 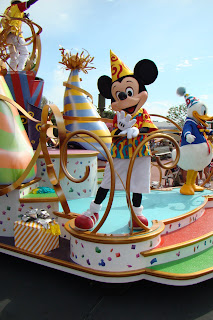 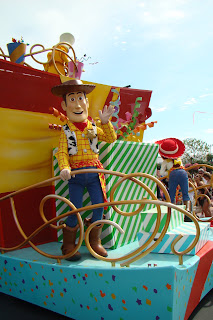 We had not planned to see Stitch's Great Escape!, described as a dark, interactive alien experience, as we'd heard it could be quite scary but there was no line, so regardless, we headed in. It really wasn't that bad and was even quite funny when Stitch burped and jumped on our shoulders - hard to hold your nose when you're strapped down!

Finally (as far as Jake was concerned), we made it onto Space Mountain. Dave went on with Jake, Caitlin and Becca while Nate and I waited in the shade (it was getting quite warm!), by yet another water feature. They came out and we did a parent switch, Jake, of course came on again, as did Caitlin and Becca - Caitlin was so worried before she went on the first time that Dave had to ride with his hands on her shoulders (you ride in individual cars, in groups of 3 lined up behind one another). She definitely has a fear of the unknown but then she loved it, of course - it can be quite frustrating persuading her! 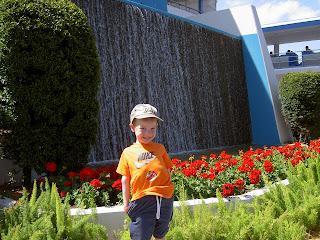 Once again, we ate lunch standing in line for another race around the Tomorrowland Speedway track. This time, I went with Nate, his driving was far less erratic than Becca's - Dave had the pleasure of being her passenger this time around. 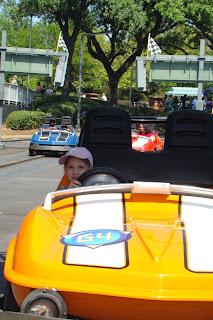 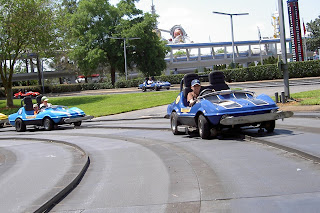 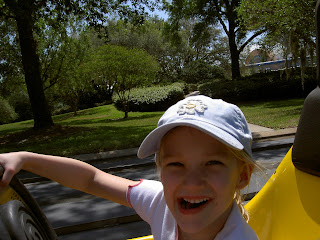 Nate had waited patiently to go on the Tomorrowland Transit Authority again. Although the others weren't that bothered, we pointed out that they'd got to do a lot more rides already than he had, so they acquiesced without much of an issue. 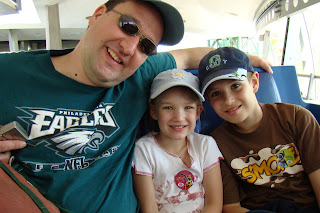 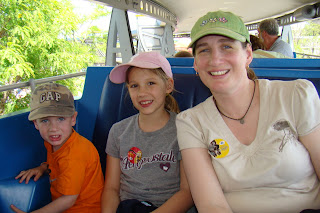 As we were coming to the end, we spotted Buzz Lightyear having his picture taken so joined the line to wait to see him. I think Dave was more excited about his photo than the kids were, especially when Buzz tried to battle with him! 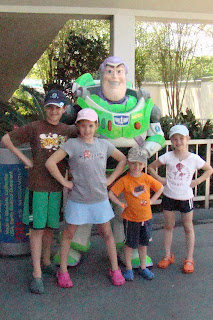 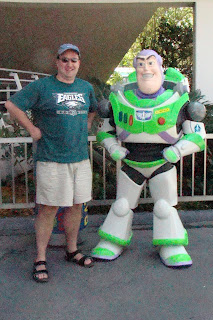 We had FastPassed Splash Mountain to do at the end of our time in Magic Kingdom in case we got really wet, we could go directly back to our condo to change. Nate fought against going on but Dave pinned him in, the cast member running the ride did not look impressed, clearly believing we were the mean parents who forced their child to do something he didn't want to. As soon as we started moving, Nate said loudly, "Oh, this ride, I like this ride!". Agh! 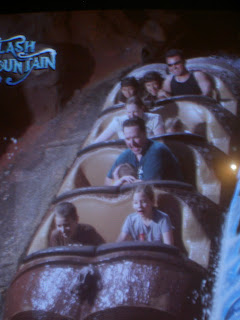 We finished by having more photos in front of the castle and shopping in The Emporium on Main Street. Caitlin chose a Minnie Mouse, Nate got a fat ball-like Tigger and Jake got Disney's Tower of Terror Clue game. 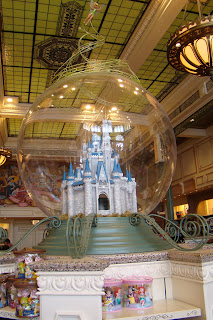 Then, it was back to the condo to take a nap and have a shower. Around 5, we drove over to Kissimee to meet up with Carole, Paul, Sarah and Jo at their rented house. By an amazing coincidence, they were also in Florida for their Easter break: 2 weeks, from the UK. We hadn't seen them in a very long time so it was a fun and relaxing evening catching up and watching the kids play. There was also a small pool and our kids jumped in as soon as we arrived and stayed in there playing for about 2 hours until pizza arrived! It was hard to leave but beds were calling. (Unfortunately the group pic came out blurry, so frustrating when the camera fails - I know, human error's always to blame!. 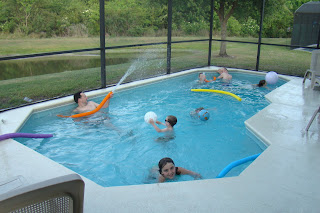 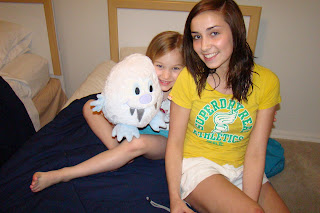 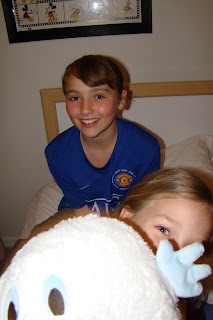 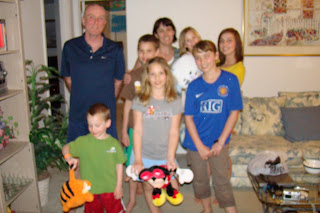