After a particularly loud storm during the night, we were on the road to the Park before 8:00am.  The Harper’s had rented a car for the day as our intention was to cross over to the west side of the Park on Trail Ridge Road.  Earlier in the week, Ranger Don had mentioned in his program that this road was open pre-Memorial weekend for only the third time in the last 100 years.  We were all excited to be able to drive over the Continental Divide; sadly, it wasn’t to be.

The rain we’d heard all night had fallen as snow at the 10,000+ feet elevation.  We were able to drive up to Rainbow Curve, passing the ‘You are TWO miles above sea level’ sign!  It was incredibly foggy at the top which did not deter our intrepid seven from embarking on a snowball fight. 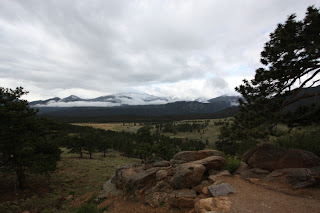 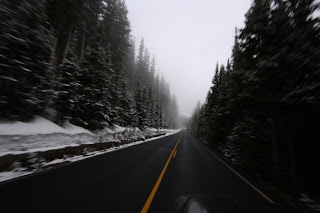 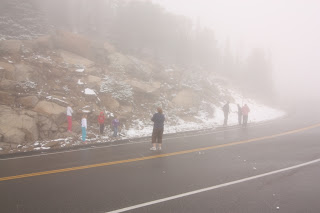 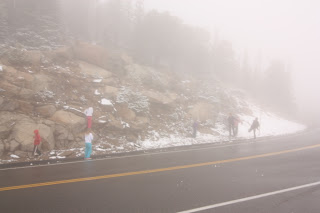 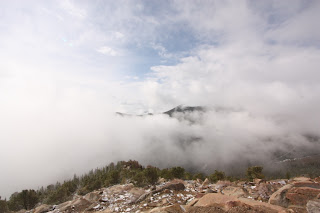 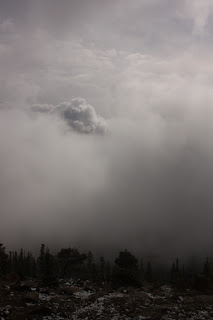 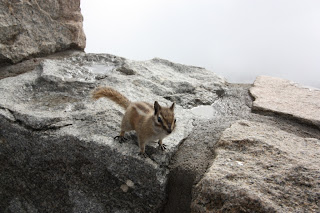 We were all disappointed that our plans had been scuppered, however that didn’t deter us from figuring out other options.  We checked out Hidden Valley (where I inadvertently started a 'graffiti in the truck dirt' artist's palette!) before driving out to Sheep Lakes. 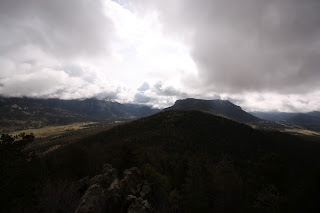 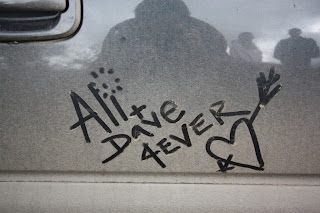 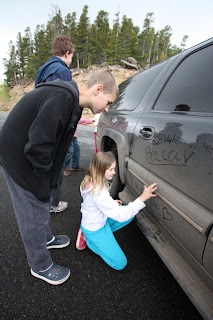 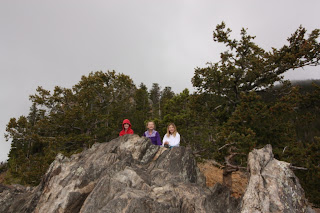 We chatted with the volunteers who said that the previous day a group of Big Horn Sheep had been at the Lakes for most of the afternoon – grrrr, we were in the wrong place!  While we were talking, another volunteer radioed over to say that sheep were on the ridge.  We quickly drove over to his location, and as the rain fell, he pointed them out.  Unfortunately they were only visible with binoculars.  Jake looked up and saw them as they ran out of sight up on the ridge.  Despite driving back and forth a couple more times, we were unsuccessful in spotting these elusive animals anymore. 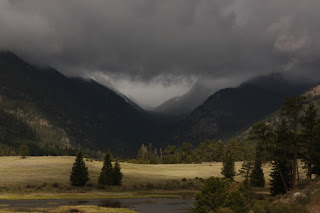 We drove to Fall River Visitor Center so that the kids could receive their Junior Ranger badges.  Another Ranger Don (he told us there are three Ranger Don’s in Rocky Mountains NP!) went through the books with them, sitting off to the side and really giving them some dedicated time.  At one point, as the kids were answering all of his questions, and he realized that they had completed every one of the activities in the book, he asked if they were home schooled.  He’d taught at the high school level for thirty years before becoming a ranger and he commented that he could often spot the home schooled kids because they really tried to do everything and were very engaged – SO cool!  They were all beaming!  I need to figure out how many Junior Ranger programs they’ve done at this point…….so many. 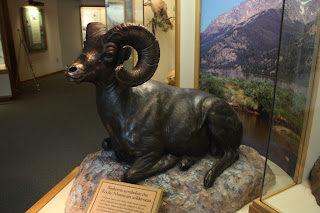 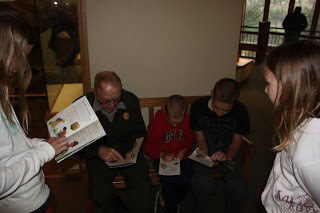 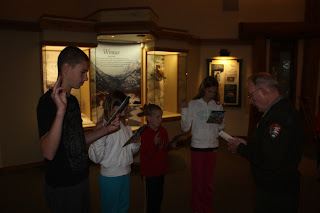 Before returning to the campground for lunch, we stopped in at Beaver Meadows Visitor Center to watch the HD movie about the history of the park – at least we saw Big Horn Sheep on film!  One of many interesting things we learned from this half-hour movie: the Continental Divide is the splitter for rainfall going either to the Atlantic or Pacific.  Of course, it makes perfect sense, it just had not occurred to us previously. 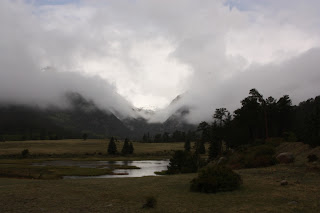 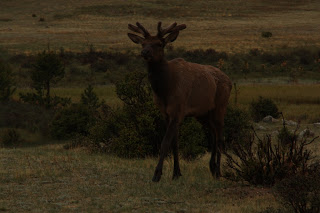 The obligatory ‘picture by the NPS sign’ was taken in the spitting rain. 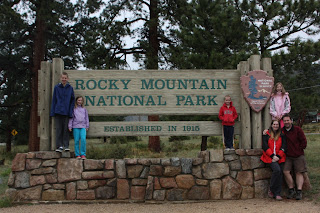 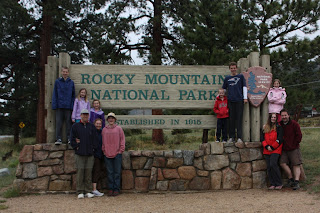 While we were saddened that our day didn’t pan out as planned, the boys were secretly thrilled!  The rain meant they were able to legitimately stay inside and play their computer games AND take a trip into Estes for a blizzard from Dairy Queen – they are easily pleased!  As we drove back into the campground a couple of elk were munching on the trees, one had an impressive set of antlers.  Nate was entertained all week by the amount of wildlife wondering through the campground: elk, mule deer, rabbits, ground squirrels………and their accompanying scat littering the ground! 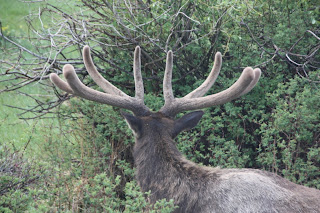 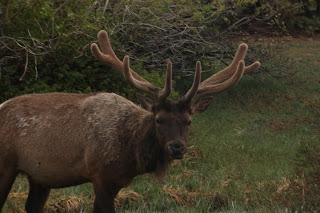 We enjoyed a fantastic week here and were sad to leave.  Plans are afoot for meeting up again in a month though, so new adventures await.

Posted by The Valentines at 9:51 AM