This has been a week of wildlife, we've seen so many different birds and animals.

There was a bees' nest in the tree next to the camper. Dave spotted it earlier in the week and reported it to the rangers, they came to check it was a nest and were quite surprised at how active the bees were, given the low temperatures. This morning, a guy in a full bee outfit (as in, to be protected from, not to look like one...), came to spray the nest, it was our morning's fascination. 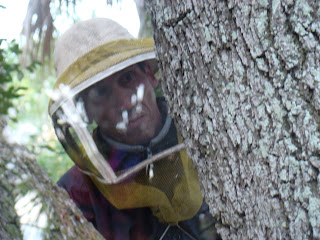 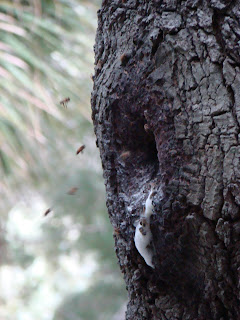 Shortly after he left, Dave called us outside to check out the raccoon that was wondering around our camper. He spent quite a few minutes sniffing around and then slowly went over to the next site. 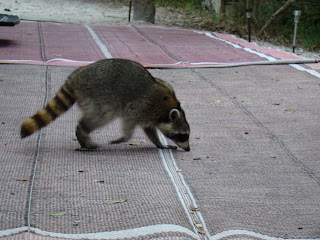 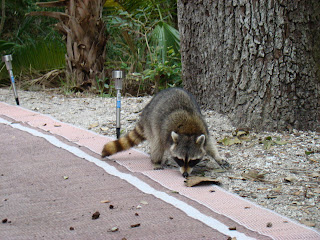 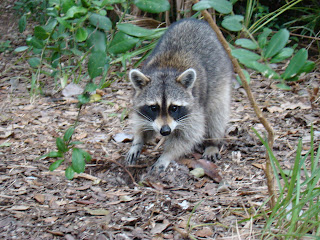 Earlier in the week, Dave and Nate were outside and spotted two beautiful woodpeckers up in one of the trees next to the camper, they were much bigger than the tiny woodpecker that often visits our back garden at home. 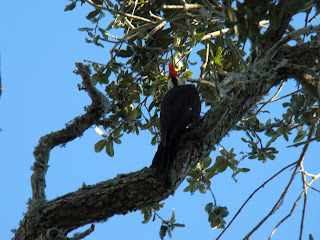 In and around all the water by the campground were a large number of different birds, including some regal-looking tall blue herons and pelicans.

Becca came out of the bathroom carrying a small lizard, "Look what I found!", by it's tail! It wasn't terribly impressed at being carried that way and bit her! She thought she was rescuing it as we had found a lizard a couple of days previously and feared it was dead as it hadn't moved for hours. We carefully carried it to some grass, after realizing it was moving and was no doubt suffering ill effects due to the drop in temperature (know the feeling!). 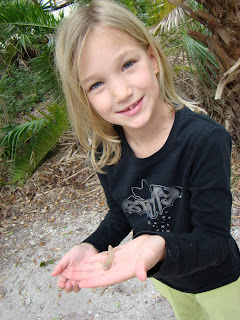 I love this photo of her, we've been waiting for that front tooth to come out for WEEKS, it's just hanging there in the middle of the 'gap', she won't let us touch it, Dave's still trying to whip it out!

These sightings, along with dolphins, made for a great week of wildlife.

On edit: as we were leaving on Saturday morning, eagle-eyed Nate spotted a frog camouflaging itself in the undergrowth - he loves that he's a 'speedster' and 'eagle-eyed'!
Posted by The Valentines at 9:49 PM